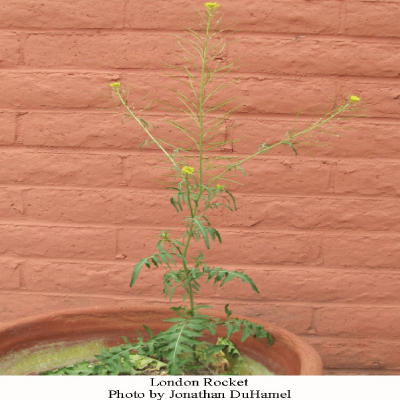 About two weeks ago, I noticed a weed growing in an unused flower pot on my deck. It was just a few inches high but it had pretty yellow flowers, so I watered it. That’s all it needed; it grew rapidly after watering. In the photo, the plant is about two feet high.

I was able to identify the plant as a “London Rocket” according to the book “Plants of Arizona.”

London Rocket (Sisymbrium irio), also called “tumble mustard,” is not native to Arizona but is a widespread invader. I just had not noticed it before. It turns out to be a very interesting plant.

The United States Geological Survey says this plant is native to Eurasia, but it occurs in Great Britain and has become naturalized in Australia, Hawaii, southern Africa, and much of western North America. The University of California says: “London rocket is a highly competitive winter annual broadleaf plant.” Its habitat includes “Roadsides, fields, orchards, vineyards, gardens, and other disturbed sites.”

According to Wikipedia: “The common name ‘London rocket’ comes from its abundance after the Great Fire of London in 1666. It was also noticed on bomb sites after the Blitz.” 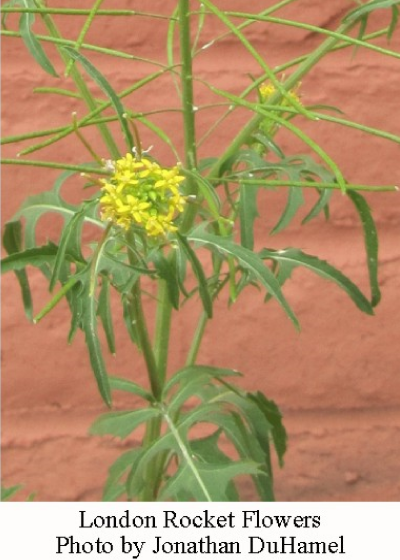 “The flowers are 1/4 inch (6 mm) wide and have 4 tiny, oblong petals. The older flower clusters are surrounded by a ring of long, slender seedpods that flare outward and resemble exploding fireworks. The leaves are green, mainly basal, larger near the base of the plant, triangular in shape, and pinnately lobed.”

“The flowers, young leaves, and seeds are all edible, but they are hot and pungent and so should be used sparingly.” I tasted the raw leaves and they are indeed hot and pungent.

Wikipedia says: “London rocket is used in the Middle East to treat coughs and chest congestion, to relieve rheumatism, to detoxify the liver and spleen, and to reduce swelling and clean wounds. The Bedouin use the leaf of London Rocket as a tobacco substitute.”

Practical Plants says: “The seeds are expectorant, restorative and a stimulant. They are used in the treatment of asthma. Externally, they are used as a stimulating poultice. The seeds have been placed under the lids of sore eyes in order to cause weeping and thereby wash foreign matter out of the eye. An infusion of the leaves is used in treating infections of the throat and chest.”

I also found a webpage from Gardening Insights titled Edible weeds in Tucson: “Don’t spray it, sauté it.”

Perhaps the moral of this story is to take time to look around. You never can tell what might turn up.

Read about other plants of the Sonoran Desert: