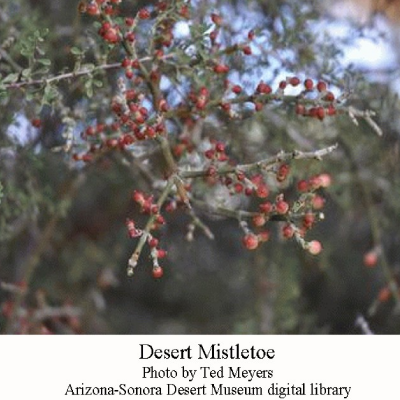 You have probably seen clusters of leafless greenish-gray material hanging within trees around Tucson. From January through March these twigs may have greenish-yellow flowers that are tiny and inconspicuous, but send forth a strong, fragrant perfume. Later on the flowers turn to small red fruit. Desert mistletoe takes water and minerals from its host plants but because it does its own photosynthesis, it is considered a hemiparasite.

According to the Arizona-Sonora Desert Museum: “Mistletoe berries are the main winter food of the Phainopepla (Silky Flycatcher). The seeds are extremely sticky and are deposited on other host plants when birds wipe their bills on branches or deposit droppings. A heavy infestation of mistletoe can damage or kill the host plant, but this is uncommon. This species [Phoradendron californicum] occurs in the desert from southern Nevada and California south to central Baja California and southern Sonora. The main host is mesquite; it is also found on other woody legumes and occasionally on Condalia and creosote bush.”

The Seri Indians and Tohono O’odham ate the berries raw. The River Pima boiled and mashed the berries into a pudding. These native people ate only the fruits of mistletoes growing on mesquite, ironwood, and catclaw acacia. They considered the fruit from desert mistletoe growing on palo verdes and desert buckthorn inedible.

The Seri made a medicinal tea from the stems. However, these stems contain phoratoxins which can easily lead to death via slowed heart rate, increased blood pressure, convulsions, or cardiac arrest. Some of these compounds can cause hallucinations, but there is no way to judge dosage.

Other species of mistletoe, especially those with white berries are poisonous, but they, too, are sometimes processed into medicine, see http://nccam.nih.gov/health/mistletoe.

Desert mistletoe is parasitic and over many years may kill its host. Once it gets in a tree it is nearly impossible to eradicate because its tendrils are deep within the tree. You can, however, slow down its deleterious effects by knocking down the stems every year.