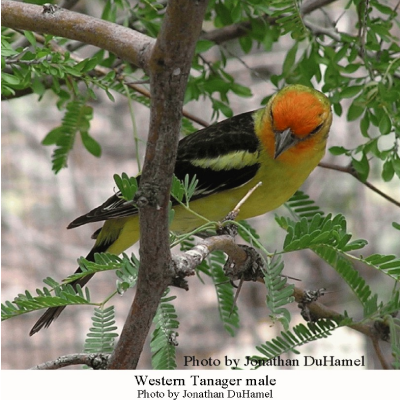 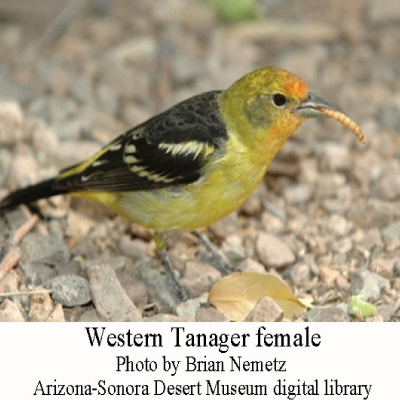 The Western Tanager winters in southern Mexico and Central America, but in the summer its range includes the western US and Canada. In summer it inhabits conifer forests in high mountains, but you may see some on the desert floor during migration.

“Western Tanagers breed in open coniferous and mixed coniferous-deciduous woodlands up to about 10,000 feet elevation in western North America. These birds are especially common in forests of Douglas-fir, ponderosa pine, and lodgepole pine. They also breed in riparian woodlands, aspen forests, oak and pinyon-juniper woodlands. They usually favor open woods including wetlands, forest edges, and burns as well as suburban parks and gardens. Occasionally they foray into relatively dense forest. During migration, Western Tanagers frequent a wide variety of forest, woodland, scrub, and partly open habitats as well as human-made environments such as orchards, parks, gardens, and suburban areas. Their winter habitat in Middle America is generally in pine-oak woodland and forest edge.”

These birds eat insects and fruit. They often forage near tree tops looking for insects and can take insects out of mid-air. They also visit flowers for the nectar and insects.

“The nest is usually placed in the fork of an outer limb of a coniferous tree. The woven, cup-shaped nest is made of twigs, grass, bark strips, and rootlets. Bluish-green eggs (three to five) with brown blotches hatch in about thirteen days. The young leave the nest about fourteen days after hatching.”

According to the Cornell lab:

“Male Western Tanagers sometimes perform an antic, eye-catching display, apparently a courtship ritual, in which they tumble past a female, their showy plumage flashing yellow and black.” 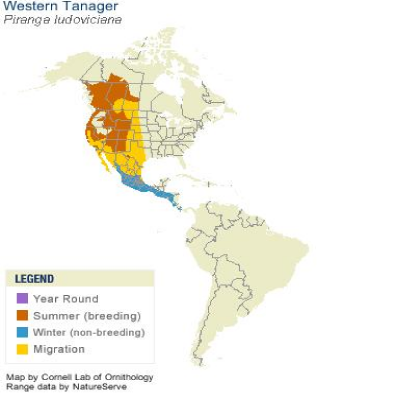 There are three other tanager species seen in the US.

The Hepatic Tanager is a dull red bird that inhabits South America and part of Mexico year round, but may get into the mountains of Arizona and New Mexico in summer.

The Summer Tanager is a completely red bird that inhabits northeastern South America and Central America. In summer it migrates to the southeastern US and northern Mexico. It can get into the mountains of Southern Arizona.

The Scarlet Tanager is bright red with black wings. This bird is often seen in the eastern half of the US in summer and winters in Columbia and Equador.