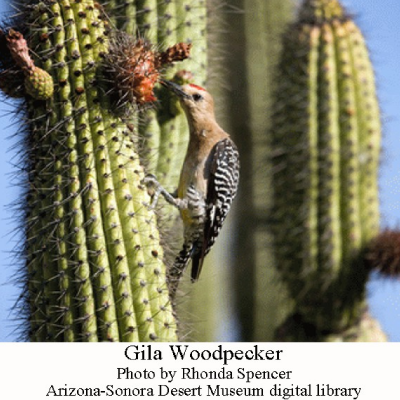 The Gila Woodpecker (Melanerpes uropygialis) is a conspicuous resident of the Sonoran Desert in Southern Arizona and Mexico. This woodpecker has a body length of about 9 inches and a wingspan of 16 inches. Its body is brownish gray and its back and wings have black and white bars. It has white wing patches that are visible in flight. The male has a large red spot on its head.

These woodpeckers eat bugs that hide beneath the bark of trees and they also eat cactus fruit and mistletoe berries. They have also been known to steal dog food off a back porch. In the photo, a male Gila is deftly eating the very prickly fruit of an organ pipe cactus. They also drink from hummingbird feeders. They have long, extensible, sticky tongues designed to lap up bugs, seeds and juice.

They have strong head and neck muscles, and the skull is adapted to absorb the shock as the birds drive their chisel-shaped bills into the tree.

Gila woodpeckers nest in saguaro cacti in holes they excavate. The woodpecker removes the pulp of the cactus, usually between the skin and the cactus ribs (the larger gilded flicker also excavates holes in saguaros). The cactus forms a “scab” on the wound that prevents water loss and infection. Because of the thermal mass of the water in saguaros, the nests are 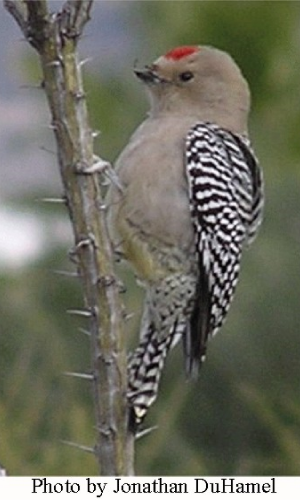 temperature controlled, often 10 to 15 degrees cooler in summer and warmer in winter. Eventually, the woodpeckers abandon the nest to seek a new abode, and the nests are then appropriated by other cavity nesters such as small owls. Females typically lay two broods a year of 3 to 5 eggs, which incubate for 14 days.

These woodpeckers are noisy (hear recordings from the Cornell Lab of Ornithology here). The male also likes to drum on things specifically to make noise to proclaim his territory. That can get quite disturbing if he picks your house, especially the metal duct work of an evaporative cooler.

I have Gila woodpeckers in my yard. For many years, the dominant male was a bird I called “Short Bill” because he had a short, malformed beak: almost no upper beak and about one quarter the normal lower beak.

Despite his handicap, he persevered and made a good living. He raised a family, and lived the normal life span of a Gila woodpecker, about seven years. His offspring still live in my yard, eating seeds from the quail block, sucking up hummingbird juice and BANGING ON THE EVAPORATIVE COOLER DUCTS.

To learn more about birds of the desert see: