Tillandsia caput-medusae, commonly known as Medusa’s Head, Octopus Plant, or Air Plant, is native to the tropical deciduous forest and oak woodlands of Mexico and Central America. This strange plant is also available from many nurseries worldwide.

The photo below was taken in the hummingbird aviary at the Arizona-Sonora Desert Museum (ASDM). More recently a hummingbird built a nest on the plant (see photo here). 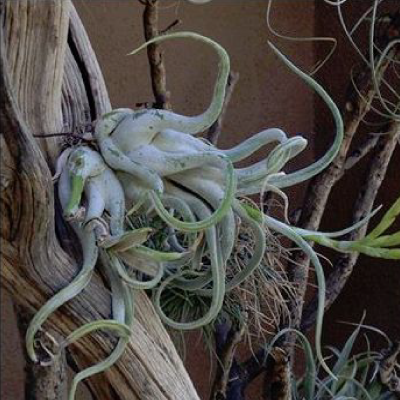 This succulent plant has small roots which serve only to anchor the plant to a substrate such as a rock or another plant. It absorbs all of its nutrients from rain or fog through its leaves which can get up to nine inches long.

“The leaf surfaces are covered with extremely hygroscopic peltate trichomes (“scales”, shaped like tiny inverted umbrellas). When dry, the trichomes of many species are folded up, allowing maximum light to the leaf surface. They adsorb droplets of fog or rain almost instantly, unfold flat against the leaf, and hold the water between the underside of the scale and the leaf surface. The water is absorbed into the leaf over the next several hours. The leaves also absorb nutrients in the rainwater, dissolved from atmospheric dust, bird droppings, and other debris that settles on the plants.”

The leaves vary from dull green to white. The light color reflects sunlight and prevents the plant from overheating. Flowers are generally shades of red that bloom in late spring to summer. Hummingbirds are among the major pollinators. The plant can be reproduced from seeds or from offset leaves (pups).

“Rosettes live for a few years after flowering, producing offsets from the base. In the wild they usually fall off their substrates after a few generations because of increasing weight, but in cultivation they can grow into very large clusters.” 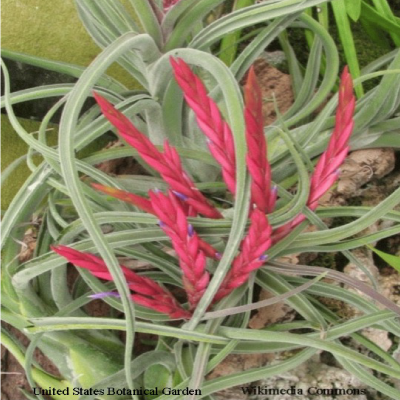 Because this plant absorbs its nutrients from the air, it has been investigated as a bio-monitor for air pollution.

“Tillandsia caput-medusae (Bromeliaceae) is an epiphytic neotropical plant able to absorb water and nutrients directly from the air. For this reason we have selected this species to carry out a monitoring study of air pollution in San José city (Costa Rica) from February 1993 until October 1994. Three trace metals were tested bimonthly in the plant: Pb, Cu and Cd, whose presence indicates different sources of pollution…The metal concentrations of the external leaves were compared with the rainfall profile. The results of the investigation show that T. caput-medusae was successfully used as a biomonitoring tester for air pollution. We recommend the use of Tillandsias in all Latin American countries, where some species of these epiphytes are very widespread.” (Source) (Another study here)