The Kit fox (Vulpes macrotis), about the size of a house cat, stands one foot high at the shoulders and weighs about four pounds. The slender, grey- to buff-colored body is accented by a bushy, black-tipped tail, large ears, and a narrow, pointy muzzle.

Kit foxes prey mainly upon kangaroo rats, another creature of the night. The foxes also prey upon other rodents, rabbits, grasshoppers, bugs, small birds and bird eggs, and also eat some vegetable matter. They have keen senses of smell and hearing which they use to find rodents in their dens.

You can sometimes see Kit foxes running along the roads in early morning or late evening looking for road kill. 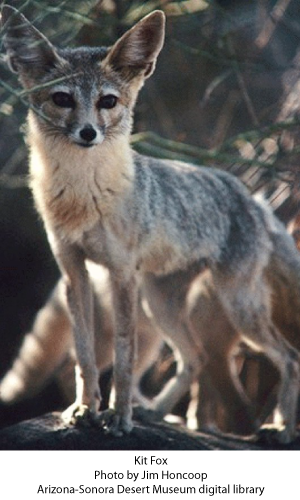 “Kit foxes can survive without free water, gaining what they need from the blood and moisture in their prey, and so can live in the most arid areas. They are the only canines to use dens year-round. Kit foxes are nocturnal — retreating to the relative coolness and humidity underground during the day probably helps them to survive in these hot, arid environments. Kit foxes change dens frequently, and there will be many mounds and holes in kit fox territory. Some dens may have as many as seven to ten entrance holes, making it appear that there are more kit foxes than there really are. These foxes are solitary during July through September, but females move into family dens in October to prepare for the new pups. The males join them later. The pups are born in February and March. Both parents feed them, bringing a steady diet of kangaroo rats for five or six months — then the young foxes are on their own. Signs of a den with pups include food remains, feathers, fur, and scat.”

Kit foxes inhabit the open, sparsely vegetated flats and areas with deeper soils for digging dens. These foxes range from southern California and Arizona, to western Colorado and western Texas, north into southern Oregon and Idaho. In Mexico, it occurs across the Baja California Peninsula and across northern Sonora and Chihuahua to western Nuevo León, and south into northern Zacatecas.

See more photos and some videos at http://www.arkive.org/kit-fox/vulpes-macrotis/

For articles on other desert mammals, see these ADI articles: