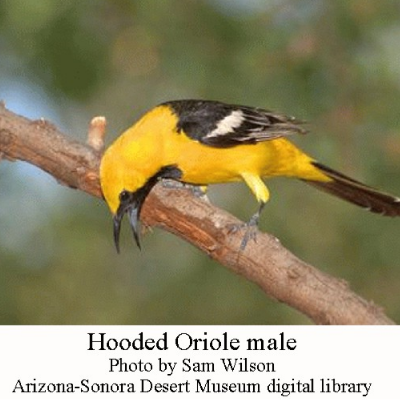 Hooded Orioles ( Icterus cucullatus) are bright birds of the Southwest . Their range includes the southern part of California, Arizona, New Mexico, and Texas, as well as Mexico. They are seen in Tucson mainly during the summer breeding season.

Males have a bright yellow, yellowish-orange, to orange body, a black bib, and black wings with a white wing bar. According to The Sibley Guide to Birds, those in the Eastern part of their range tend to be more orange. Females and juveniles are olive green to olive yellow with dull black wings. Both males and females have a body length of about 8 inches and a wingspan of 10- to 11 inches. 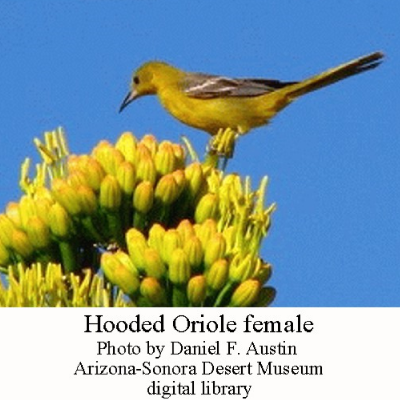 These birds occur in a variety of habitats including open woods, tree plantations, palms, city parks, suburbs and they favor groups of palms for nesting, even when these trees are in cities. Nests are cup-shaped and usually hang from leaves or tree branches. The nests are often parasitized by cowbirds.

According to the Arizona-Sonora Desert Museum (ASDM), “The Hooded Oriole lays three to five bluish or grayish-white, spotted eggs in a long, hanging, woven pouch that it enters from the top. The nest usually hangs in a palm, large yucca or a eucalyptus tree. Incubation is by the female and takes twelve to fourteen days; both parents feed the nestlings.”

These birds eat primarily insects, but will also take nectar and fruit. ASDM notes that the birds forage in trees and shrubs and “flowers are visited for nectar; feeders with sugar-water also attract orioles. The Hooded Oriole is a slow and deliberate forager, which makes it a rather easy bird to observe in the field.”

Listen to their sounds from the Cornell Lab of Ornithology here. 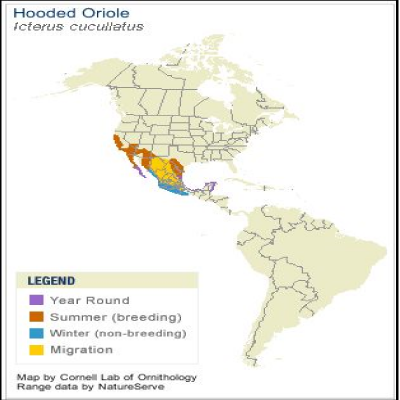 See articles on other birds of the desert here: