Prickly pear cacti (genus Opuntia) range from southern Canada to southern South America, in habitats ranging from arid desert to tropical semiarid woodlands and high mountains. There are about 18 species in the Sonoran Desert region, some of which form hybrids. Native peoples recognize many more varieties. I have five (maybe six) varieties of prickly pear in my yard. The most common in the Tucson area is the Engelmann prickly pear (photo). 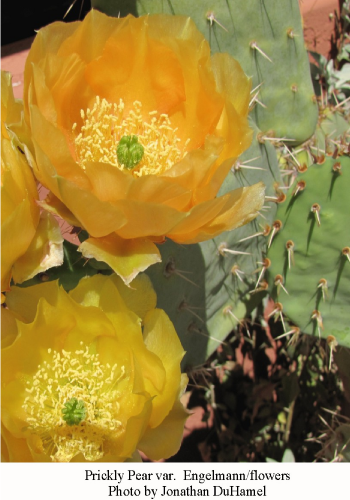 According to the Arizona-Sonora Desert Museum (ASDM), cacti of genus Opuntia, which includes chollas, are distinguished from other cacti by four characteristics. “First, the stems grow in distinctly jointed segments. The elongation of joints is permanently terminated by the onset of the dry season; subsequent growth of the plant occurs by the initiation of new joints by branching from the areoles. (Other cacti have indeterminate growth. A saguaro stem, for example, grows ever longer each growing season until the plant dies or the stem tip is damaged.) Second, whether or not they have regular spines, Opuntioid areoles bear glochids (usually small to minute, barbed spines that are very sharp and brittle, and very easily detached). Third, rudimentary leaves are present on new joints. Fourth, the seeds have a pale covering called an aril; most other cacti have shiny black seeds.”

Prickly pears are Western Hemisphere plants, but they are now found all over the world. “Sailors brought them back from the New World in the sixteenth century and they are found in Italy, India, Ceylon, South Africa and Australia. In all but Italy, the hope was to raise cochineal insects, but the insects died and the cactus escaped to become part of the landscape.” – ASDM

Cochineal insects, a source of red dye, grow, sometimes profusely, on prickly pear pads under white fuzzy webs, especially in August. (See The Cochineal, a little bug with a valuable product) Spineless varieties of prickly pear were also tried as food for cattle. In South Africa, I saw many plantations on farms for that purpose. 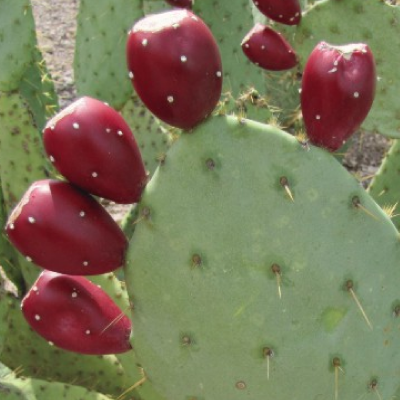 Both the pads and fruit are eaten by pack rats, jackrabbits, javelina, insects, and humans. Note: the pads contain oxalic acid which can make humans sick. However, new spring pads contain much less oxalic acid so these pads were used for human consumption. Preparation may include boiling to leach out the acid. Many native American tribes used the pads as their green vegetable. The flesh is mucilaginous (like okra) and was used to thicken soups.

Fruit from any of the prickly pears can be eaten by humans. The fruit turns reddish-purple when ripe. (The ripe fruit is called “tuna”or “cactus fig”) Some preparation is required to remove the spines and glochids. Native Americans rolled the fruit in sand or other plant material. Cowboys used to put the fruit on a stick and burn off the glochids with a match or over a camp fire.

Generally people eat the flesh of the fruit and discard the seeds. The seeds are edible, but too many cause intestinal upsets. The seeds can be parched, dried, and ground into a flour. They don’t cause digestive upset that way. The juice of the fruit may be made into a syrup or jelly or used in pies and drinks.

Flower petals can be used to garnish salads.

Preparation techniques for both pads and fruit are shown here: http://www.wikihow.com/Eat-Prickly-Pear-Cactus and

According to WebMD: Prickly pear cactus is used to treat type 2 diabetes, high cholesterol, obesity, alcohol hangover, colitis, diarrhea, and benign prostatic hypertrophy (BPH). It is also used to fight viral infections. Prickly pear cactus contains fiber and pectin, which can lower blood glucose by decreasing the absorption of sugar in the stomach and intestine. Some researchers think that it might also decrease cholesterol levels, and kill viruses in the body.

According to DesertUSA, “Researchers are using the prickly pear juice, produced by Arizona Cactus Ranch in Southern Arizona, for their studies, because it is pure. Pascua Yaqui Tribe in Tucson Arizona uses Arizona Cactus Ranch Prickly Pear Nectar in their Alternative Medicine Diabetic Preventive Program since 1997. Prickly pear extract has also been shown to reduce the severity and occurrence of hangovers if taken in advance of drinking. Nausea, dry mouth, appetite loss, and alcohol-related inflammation were all reduced in test subjects who ingested prickly pear extract 5 hours prior to drinking. You can make your own tests and see if it works for you, which is the only test that really counts.”

The juice from the pads was also used topically to treat cuts, bruises, and inflammation of the skin. 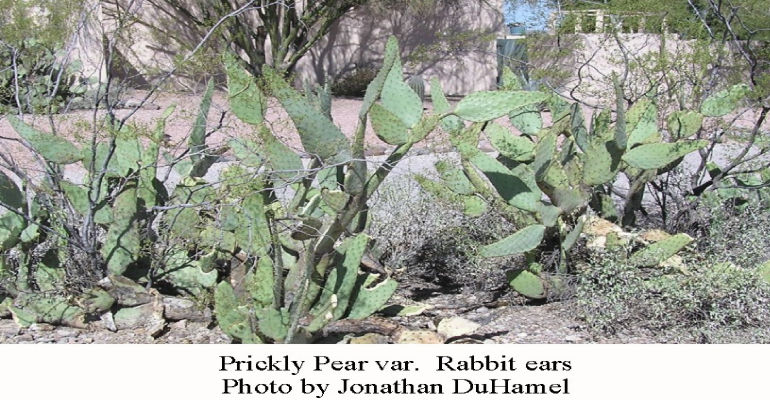 The juice from prickly pears has long been used to strengthen adobe mortar. It was so used in the restoration of the San Xavier Mission in Tucson.

As mentioned above, there are many species and hybrids, so exact identification may be difficult. ASDM notes: “Numerous species of cholla and some prickly pears hybridize with one another. Hybrid populations are fairly common. Some of these hybrids may reproduce sexually; others are sexually sterile but can reproduce vegetatively. There are several such ‘clonal microspecies’ in the Tucson area alone, some of which are restricted to a patch of just a few acres. Most of the descriptions of these species are published only in scientific monographs and have not yet appeared in general plant lists and keys. So if you are frustrated with being unable to identify a cholla or prickly pear from a field guide, be assured that you’re not alone. No field guide can cover all the possible hybrids and ‘microspecies.’”

Palo brea trees and their uses