Sacred Datura (Datura wrightii), widely known as Jimson Weed, is blooming and will continue into late summer. This perennial plant occurs from central California to Texas and Mexico and into northern South America.

The pretty, lily-like white flowers can reach up to six inches long and three inches wide. The dark green leaves are sticky and can give off an unpleasant odor when crushed. The whole plant can reach five feet tall and several feet wide. 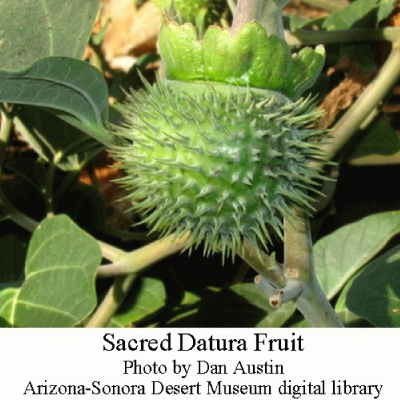 Datura produces a golf-ball sized, melon-like fruit which is covered with spikes, hence its other name “Thorn apple.”

Datura has a large tuberous root which allows the plant to survive cold winters that may kill the above-ground foliage.

“All parts of these plants contain numerous toxic alkaloids. One of them is scopolamine, a common ingredient in cold and nausea remedies. Shamans in various cultures have ingested datura to induce visions. This is one of the most dangerous plants used for this purpose, because not only do individual plants vary in potency, but humans also differ in their tolerance to the toxins. Despite widely-published warnings, every year a few people suffer life-threatening poisoning from eating this plant; some of them don’t survive.”

ASDM also notes: “This beautiful plant is a useful ornamental if there is sufficient space for its large size and one is willing to put up with its winter disappearance below ground.
Hawkmoths pollinate the flowers and lay eggs on the foliage. The caterpillars (called “hornworms” in this family) incorporate the plant’s toxins into their own tissues and become toxic to their potential predators.”

James W. Cornett, in his book “Indian Uses of Desert Plants” also warns of the toxicity and notes many other uses for this plant.

“A paste made from the leaves and stems was applied to broken bones and swollen joints to reduce or eliminate pain. Inhalation of fumes given off by burning or boiling the leaves was effective in relieving respiratory aliments.”

Patches of Sacred Datura grow in several exhibits at the Arizona-Sonora Desert Museum. The animals in these exhibits leave it alone and so should you.

Learn more about desert plants from these ADI articles: