The yucca-like Desert Spoon (Dasylirion wheeleri) is also known as Sotol. It is very similar to Beargrass and grows in the same habitat. However the hundreds of long, narrow leaves of Desert Spoon are armed with small, sharp, marginal teeth. The rosettes of leaves are usually stemless and up to 6 feet in diameter. In older plants, a trunk may develop and the trunk itself can be as much as 6 feet tall. Like Beargrass, the taxonomic classification of Desert Spoon has changed from time to time. 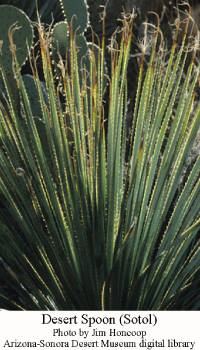 Desert Spoon is a dioecious plant which means individuals produce only male or female flowers. The flowers are carried on a stalk that emerges from the center of the rosette in early summer and may grow up to 12 feet tall. Males generally produce tiny white flowers while the whitish female flowers are tinged with green or violet. A single plant may produce thousands of flowers which, when pollinated, produce small, reddish-brown, winged seed capsules which contain a single seed. Unlike agaves, Desert Spoon does not die after flowering. However, the plant may not flower every year.

According to the Arizona-Sonora Desert Museum, “Desert spoon grows on rocky hillsides and slopes at 3000 to 6000 foot elevation in southeastern Arizona, southwestern New Mexico, northern and eastern Sonora, Mexico, and in west Texas. Despite its English name, it is primarily a grassland species that extends into the desert. Blooming plants attract huge numbers of insects, including flies, bees, wasps, and butterflies.” 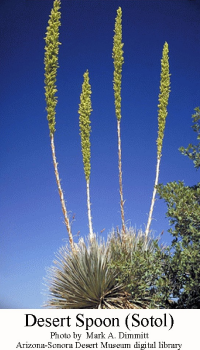 The Tohono O’odham wove beautiful sleeping mats by plaiting together Desert Spoon leaves after removing marginal teeth from the leaves. The Tarahumara and Pima Bajo peoples of the Sierra Madre Occidental of Chihuahua weave baskets from the stripped leaves. They also employ the expanded leaf bases in making large artificial flowers as holiday decorations.

The other name for Desert Spoon, Sotol, is also the name of a distilled spirit made from the plant (in a process similar to making mescal from agaves). It is known as the state drink of Chihuahua, Durango and Coahuila. The inner part of the plants and the core of the flower stems are edible. (Source) The plant is protected in Arizona.

Desert Spoon is used as a landscaping plant, but should be kept away from walkways because of the spines on the leaves. See many photos here.

Below is a list of my articles on the natural history of the Sonoran Desert. I invite readers to suggest subjects for more stories.

Kit Fox – another creature of the night

Carpenter Bees – black and gold and smelling like roses

The Sex Life of Bruchid Beetles

Palo brea trees and their uses